Sean Weekes has undertaken a major project in the form of a trawler conversion into a house boat.  The work is being undertaken by a connemara shipwright who has overseen all works to date.

This is the second project iniciated by Sean, His attempts to Save the “Bonny Roy” a John Tyrrell and Sons 50 ft Trawler has run into difficulty with extensive rot discovered to frames and planks.

A brief outline of Bonny Roy’s history is given below:

The Bonny Roy No. 58 was built for Mr. Charles Campbell of Kilkeel in early 1945 by John Tyrrell and Sons, Saw Mills, South Quay, Arklow, Co. Wicklow.

The vessel was purchased and rigged for drift netting and seine –netting and operated out of Kilkeel.

The vessel was primarily used for salmon fishing under her previous ownership but had not being in use for some years. Prior to the development of the marina in Galway harbour Bonny Roy was moored on steamers quay. Further to the development of the marina the vessel was moved outside the lock gates to various locations including the mud dock, the layby and the longwalk. She was last moved to Claddagh quay where she has remained until now. 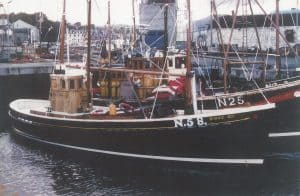 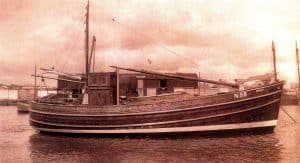 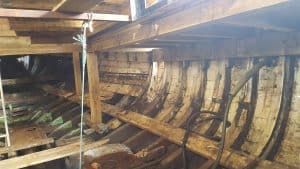